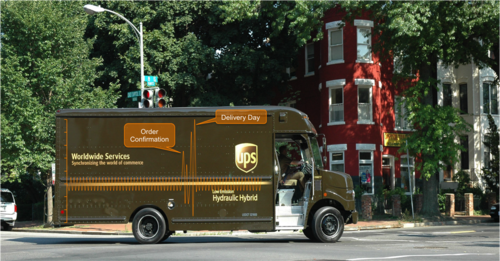 I was on my way to a 25th company anniversary and you can image my anxiety leaving the house on the iPhone delivery date. Just thinking about the idea of the UPS driver turning around the corner with the most important thing an UPS driver could ever deliver and I am not at home? What to do? Cancelling the event? I really tried but even: “I promise, I’ll come to the 50th anniversary!”, wasn’t so well received. Stupid scheduling mistake!

The Most Beautiful Brown Truck

So I pack my crappy old iPhone 5S and take the bike to the event, still on the lookout for the most beautiful brown truck you’ve every seen. And just when I am arriving at the event I see him, the UPS truck! I casually make my way closer to the car just to catch the driver on the street after delivering a box to one of the near by offices – must have been a washing machine, Surface or iPhone 6 Plus, given the size of the box.

Believe it or not but UPS ran 11 trucks that day in my little town. That makes 14,545 citizen per truck. I have no idea how they squeeze almost 15,000 iPhones in one truck but this particular driver wasn’t just a very kind person, he actually had my iPhone. Not just that, he actually knew the number of my house when I asked him if his route takes him to my street.

This encounter with the UPS driver made me aware of the lack of appreciation I have for the work of the delivery man. Checking my #fitbit confirmed that my UPS Graph is almost flat most of the year, showing only activity during the days the new iPhone launches. I wouldn’t go as as launching an UPS-Driver-Ice-Bucket-Challenge but really want to share my appreciation for those women and men who keep the world going!